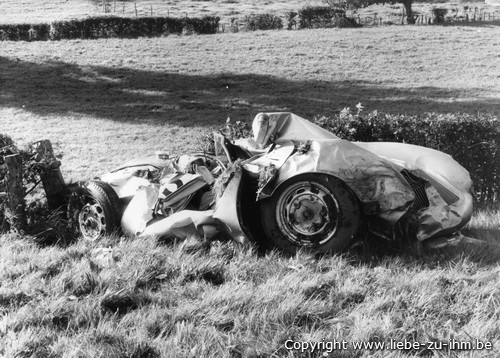 The 550A appealed to me as it still had that look of the original 356/1 built in Gmund and the 550’s, but yet was much more sophisticated.  In a way it was the last Porsche race car to have resemblance of what I would call the Ferdinand & Komenda Design Team’s “Old School” look, having direct links the “Peoples Car” from the late 30’s.  Not many were built, considering (95) 550’s were constructed and only an estimated 39 550A’s.  Of the 39 built many had been destroyed in racing  and was not sure how many maybe left in the world.

I had been looking for a 550A for some time in Europe and here, but none had come up for sale, until one day I received a call from an old friend in Santa Cruz, Jim Wellington.  Jim told me to get on a plane and get down to San Franciscoas there was two 550A’s available in the Bay Area.  I did and was introduced to 0141 and 0145. (0145 was the last of the 550A production run) At this point I need to say there is talk of “0146” being built as late as 1959 and sent to Straehle, D., but I have never come across pictures or history on this car and have my doubts as to its existence.  0145 also had a long racing history and had just come down from Canada.  It needed a complete re-bodiment as well but had a complete running gear still intact.  In discussions with the owner I soon realized I would not be able to afford this purchase.

Jim and I then traveled across the Bay to Oakland.  It was now early evening and I could tell we were in a bad part of town when Jim turned a corner, down an alley and at the end was a small parking lot with what looked to be a single story warehouse with a tall fence with concertina wire and cameras on polls.  Jim assured me not to worry as this was a very secure storage facility of many rare & valuable cars and there had never been issues.  After entering the building I was shown what looked to be a pile of parts, wiring and lots of dust on what resembled the cockpit of a Spyder.  I could not distinguish what I was looking at, that’s when Jim said, “Well, This Is It”. 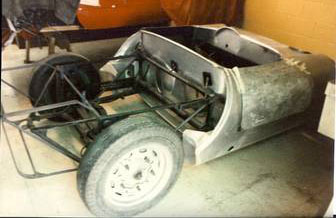 I immediately starting thinking about how I could go back and make the deal on 0145 as what I was looking at was certainly a project beyond what I had ever thought possible.  We cleared some of the junk off the chassis revealing what looked like someone’s early attempt to build a new body using the original doors and rear section. I then looked in the area on the frame that would have carried the vin #.  And to my surprise, right where it should be I found the numbering, (550A-0141) stamped into the rear transmission support carrier. 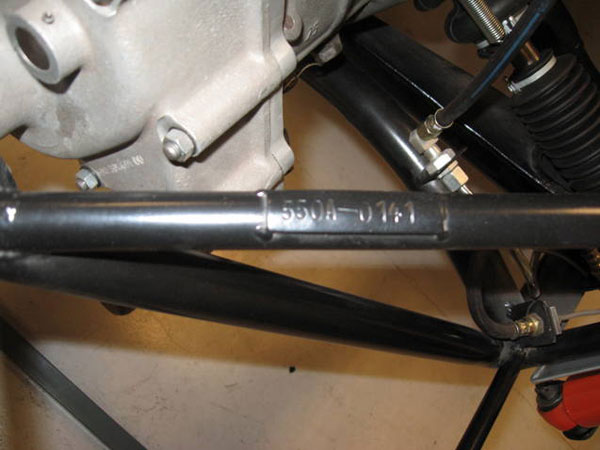 It was late.  That night in the motel I carried on with internal dialogue of actually owning a 550A and how would it be possible to resurrect this old race car to once again travel at speed around a vintage course or even possibly compete in a concours event.  One thought kept coming back.  Dad had once told me “I can teach you many things, but there is no better teacher than the mistakes we make in life”  Little did I know what he was trying to tell me at the time, but this was to become one of my life’s greatest  lessons.  I made a decision that night that #0141 would rise again like the Phoenix.

The next day was spent going over exactly what was there and wasn’t.  It was basically a rolling chassis, the motor in so many boxes, and the transmission too.  The gear box was of special interest as it was very unique as it was Porsche’s first and only 5 speed box in a split case.  It was designed for LeMans with first & reverse gear located in the oversized shift housing with straight cut gears as opposed to a conical cut.  The original rear body half came with the car, but it was in very bad shape and could only be used as reference guide during the re-bodiment. 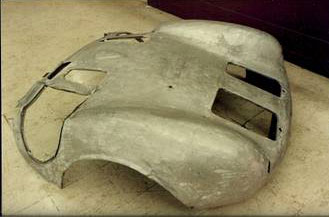 I found it was missing many parts, including the internal shift rails and some of the gearing which would be almost impossible to locate today.  Many critical items, such as the rear lower shock mounts appeared to have been recently removed.  That’s when it was explained 0141 was being used as a parts car for some of the remaining 550A’s.  This was to be expected, but also played into my plans to make an offer on the car that I could afford and still be accepted by the owner.  A few days later I made a written offer based on a payment plan over 6 months and that no other parts would be removed.  The owner eventually accepted the offer with minor changes and also the provisions of payments over a 6 month period.  The deal was done!

Once the last payment was made, Dad and I flew into the San Jose Airport, rented an enclosed truck and transported 0141 to Issaquah.  My Dad and I have made many of these “road trips” together.  He has been my co-pilot many times on these long trips tracking down cars and parts.  That summer was spent cataloging and cleaning all the parts and pieces.  The frame was stripped and repainted.  During this process I made many measurements on the frame and was surprised to find no chassis damage and how true the frame was.  Later when the car was put onto a chassis table we found the car’s frame was as straight and true as could be hoped.

The seller of the car had highly recommended a coach builder in the Bay Area and I visited him on several occasions.  He was just finishing up an RSK and I was truly impressed with his talents.  There was another original RSK there being used as a template basis for the re-bodied RSK and was just completing a 550 which was getting some body repairs.  We agreed on a time frame for the re-bodyment and I delivered the car and rear portion of the body that fall.  Coach builders are truly artisans in their own right.  When the Spyders were originally constructed the outer portions of the body were pounded out over a wooden body buck leaving noticeable waves in the aluminum.  The coachbuilders of today use what is called the “English Rolling Wheel” to form the metal into the desired shape.  This leaves the metal very smooth and uniform.  Bodies constructed by this process can be simply polished as there is usually no need for body fillers.  If you have ever seen a Spyder which is metal finished, it is true a beautiful sight.

I should say the english wheel is only one of many tools used, but it is the primary instrument employed in this process.

I continued to visit the shop throughout the next year – inspecting the work and making progress payments.  I was truly impressed with the work on the new rear section but as work began on the cockpit area and front portion of the car I found certain issues that were needing to be corrected.  The firewall forward is the most challenging area of a 550 and all the Spyders.  Wendler, who built the bodies for Porsche, built airplanes as their main business.  Very well constructed, all body panels had the outer and inner skins.  For example there was an inner fender sounded by the outer fender.  This was to give durability and strength to these very light cars.  As the project continued more problems arose, the fuel tank would not fit, the firewall was too high, one side of the dash was lower than the other and the front of the car never had the correct shape.  I ended up removing the car hoping at some point I could have the problems correct and proceed with the mechanical restoration.  I only blamed myself for these issues as I soon realized I had not done the appropriate research and supplied the couch builder with an original example to template from. 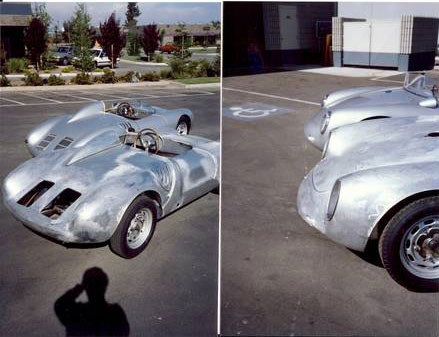 After transporting the car home and another year passed I rekindled my interest in the project, I contacted another old friend, Bill Doyle of Du Bois,WY.  If you have been around Porsche 4 cam race cars then you know Bill is the worlds best in the area of rebuilding these engines and their highly complicated “Roller Crankshaft”.  A normal crankshaft is one moving part whereas the Roller Crankshaft has several hundred moving parts.  Hirth of Germany originally developed this technology for the ME109 during WWII but later used in the Mercedes 300 SLR, early Porsche streetcars and all the Spyder race cars.  I flew Bill out to do a thorough inspection and estimate for the mechanical restoration.  Bill spent a full day going over the car and the parts I had accumulated.  That evening Bill gave an estimate for the mechanical work, but also gave me some very bad news.  He confirmed my fears when he pointed out the entire front portion of the body from the firewall forward would have to be removed and redone correctly.  I took Bill’s advice to heart, as at this level things must be done to perfection.  I then rolled the car back into the garage, covered it, and with Bill’s help began to plan my next move.