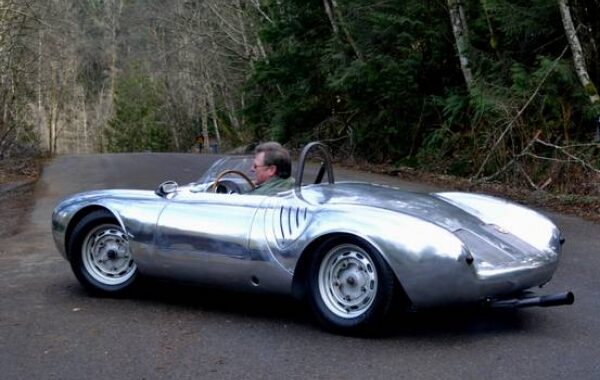 It is now spring, 2010.  I received a call from Bill Doyle in Jackson.  Bill had completed the rebuild on the roller bearing crankshaft with the engine in his clean room now to receive the crankshaft and to start building up the lower end of the motor.  I had asked Bill some time ago to let me know once he had the case half’s together as I would like to learn more on the set up of the cam timing.  In receiving Bill’s call, I knew this train was now leaving the station and would not stop until the engine was complete, running and installed in Porsche Spyder 550A-0141.

Anticipating these new developments is always exciting but getting to Jacksonis always a pain.  I, like you, have always enjoyed a good road trip, but let’s face it; this is 13 hours of hitting it hard and many times in bad weather.  Maybe I’m getting old but this time I chose to fly to Idaho Falls, rent a car, and drive over the hill.  I arrived in town just in time to join Bill and his lovely wife at the Wort Hotel for diner and cocktails.

The next morning was an early day as Bill arrives as his shop about 4:30 AM and likes to get things going before the phone starts ringing.  I didn’t think Bill was there yet as we were up a little late the evening before, but of course I was wrong again.  Turning the shop doorknob, I found it open & soon found Bill hard at work in the engine room.  This is exciting when you walk into a room that immediately sends you back 40 years in time with pictures on the wall that were taken in the Zuffenhauzen factory, a couple of these large pictures showing Vasek Polak as a young man studying the 4 cam assemble process.  What sticks in my memory are the smells of solvents, oil, and grease.  I once worked for a Porsche dealership so you know what I mean.

Bill and I were having our coffee, when he said, “OK Steve”, “this is where the rubber meets the road”. “Let’s get going as we have a lot to accomplish over the next couple of days”.  This is where Bill pulled out the factory Carrera Assemble Guide, sat me down, and reviewed the cam timing procedures.  He explained that the factory allows for a timing variance of 4% +/-.  Then he said, “that’s not good enough”.  “We need to see 1% or less”.  The cam timing on these motors is adjusted in many ways.

First and most dramatic change is pulling the head back away from the case, disengaging the splined cam drive shaft to the head from the “A” or “B” gears and turning this shaft to the next spline.  The next and less dramatic is the cam drive gear on the camshaft, intake or exhaust.  Next is exchanging cam lobes as the lobes are pressed onto the camshafts with a keyway to position the lobes.  Then the drag levers can be changed out, with the last being the valve stem cap being changed or machined down to allow for a minute change in the timing.  As it turned out, all these processes were employed to yield the “Perfect Cam Timing”.  While Bill actually smiled on a couple of those revolutions, there was also the other side of this coin.  The bottom line is it took two days to time 4 cylinders, but you knew and Bill was confident they were all spot on.

There was still many hours of work to be done on the finale engine assembly, which would be done after my departure.  That night we again enjoyed a wonderful diner under the Cowboy Bar.  To my good fortune, the waitress misunderstood my order and I ended up with the Elk Plate.  Not having ever tried elk, I was taken back a little at the presentation, but it looked so good and she so cute I decided not to speak and accepted the dinner.  This ended up being the best meal I ever had.  The meat was so lean and tender that this is now my usually dinner choice whenever I return to Jackson.

Over dinner, we discussed many things, but for me the most interesting time was Bill’s discussion on his history working on these most complicated machines.  This was not something he just fell into, but rather a step-by-step process taking him on his own journey with many rewards.  He first worked out of his VW van in Santa Cruz at the beach doing tune ups on his friends cars while they were out surfing.  He then moved onto Mr. Beatle in Santa Cruzas a part owner.  He was eventually mentored by Jim Wellington in Santa Clara for many years where he honed his craft on the 4 cam motors.  Next moving on to open his own shop in Fresno with the help of Don Orosco.

We were now getting close to the accumulation of a 26-year adventure.  I asked myself, “So what happens when you have completed this journey?”  I didn’t have an answer.  I knew we were close to the goal, but what next?  I decided not to dwell on the issue as time has a way of taking care of these things.  Lying in bed that night I thought again about the fun I have had, places I have gone and people I have met.  Soon I knew that this is just one chapter in the book and there would be others written and past ones remembered.  I have spoken earlier as to the lessens and adventures surrounding these cars, but I want to share one indelible experience with you, which will always follow me and my relationship with Porsche involving my Dad.

Many years ago, Dad was heading up skiing with my little brother on a Saturday morning to spend the weekend skiing at Crystal Mountain.  I knew he had an interest in the 59 convertible D, which I had just bought so I asked if he might like to drive my Porsche.  I think he really looked forward to driving a “sports car” and so dad said, “Sure”.  I showed up early that morning at the old homestead so they could get an early start.  My 59 bus with the 36-horse power motor was still in the driveway so at least I would have something to drive.  After Dad and my brother loaded up and headed off to Crystal Mountain, I stuck around to help Mom with some chores.  I still loved this place, on 1st street in Steilacoom, on the water and looking out to Ketron, Fox, McNeil, Eagle, and Anderson Islands, first settled by my grandparents near the turn of the century.

I was outside working in the yard when I heard the phone ring.  Then from my mom’s voice I heard a loud “NO-NO”.   A moment later, she came to the open door and calmly told me “Dad and your brother have been hurt”.  “You need to get up there.”  Without another word spoken, the 59 bus was fired up and headed down the driveway.  The gas pedal never came off the floor for the next hour and half as I wound my way up 410. I had the radio on trying to find out any information.  That’s when I heard there had been a sniper with a rifle hidden in the rocks above highway 410 just east of Green Water who had shot up several cars, one of which was an old Porsche.  I thought the worst.

Later I found that while Dad was driving just east of Green Water, he was shot in the left shoulder.  Being a WWII vet he knew immediately he had been shot, so he down shifted, flooring the accelerator, but just then he was hit again, and then my little brother was hit. Dad did the best he could driving and shifting with his right arm, but as he put it, “I floored it and never looked back”.  His only concern now was for his son.

When I got to Crystal, I drove right up to the front of the parking lot and found my little car at the bottom of the stairs with the nose stuck in the snow and people pocking their fingers into the holes.  I was directed to the infirmary where I found Dad and my brother being patched up and joking with a man at their bedside.  Dad was surprised to see me and introduced me to the owner of Crystal Mountain.  Dad said they were clean wounds with the bullets passing through his upper arm, the other through his leg.  That’s when Dad asked about the shooter as he had heard it was a young high school boy.  Someone spoke up saying, “yes”, “he was only 16 years old, and now dead”.  Dad looked down then up again and looked right at me with wet eyes and said, “those can be tough years for a young man and I am sorry for his parents”.  I learned a lot that day, again, more about my dad and his compassion for others but also, his understanding of the difficulties young people have at this age.  I knew I would never forget this one day in my life.