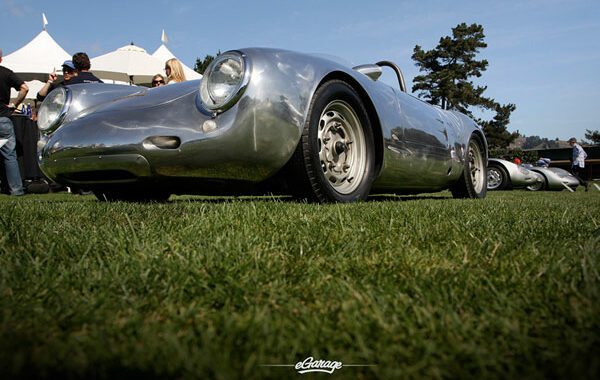 We were now within a couple of weeks of the final completion of Porsche 550A-0141.  Bill Doyle was spending 100% of his time trying to sort everything and get it wrapped up.   It has now been over 50 years since 0141 came out of the Zuffenhousen factory and almost 36 years since it last was taken to the track.  It was also 26 years since I began this project. You cannot imagine my anticipation of finally sitting in the seat behind the wheel of 0141 and putting my finger on the starter button. 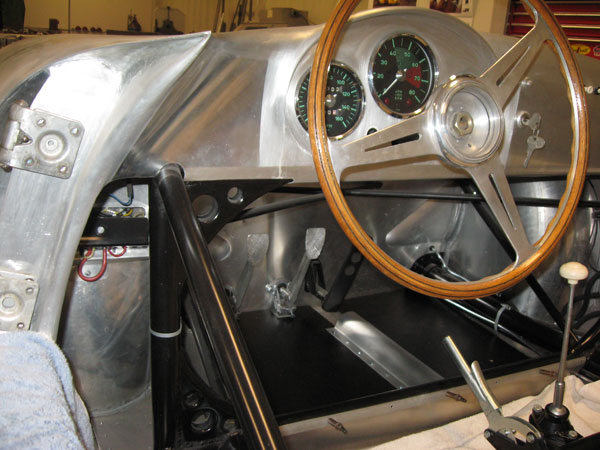 When I was very young I was able purchase several early Carrera street cars, restored those cars, and was lucky to be able to keep most of them.  The Spyder would be oh so different.  On this project, I ended up managing things and sometimes miss-managing things.  One thing you learn very early is to seek out the best people, even if they cost you more and you may have to wait much longer.  Believe me, the long look is “IT’s WORTH IT!”

Bill and I were talking every day as I was trying to set a day for my travel over to Jackson.  For this trip I had decided not to take my old truck and car trailer, but rather to fly into Boise where I could reserve a low bed box van and drive to Jackson.  I was also looking for someone to share the trip with, as I would certainly need some help.  While Dad had been a great co-pilot on many of these past trips he had recently been dealing with some health issues.  Dad wanted to go but while his spirit was most willing he is now 88 and felt this mite be a little much for him.  All my friends were working or with other commitments so this would be a solo adventure.

I think my anticipation got the better of me as from my last conversation with Bill it was clear we were very close, but then I did what I call a “Stupid Steve”.  I went ahead and made my flight arrangements for the next day without consulting with Bill.  The next day I called Bill from the airport and told him I was on my way.  During the conversation, I could tell Bill was a little taken back by my arbitrary decision, but at the same time, I knew Bill would not mind a little company.  I arrived early the next morning around 4:30 AM only to find Bill already hard at work in his shop.  The first hour was spent going over paperwork and finalizing this side of the project.  As we went over the file, we both looked at each other and started to laugh as we both realized at the same time that the mechanical side of this project had been ongoing for the last ten years.

We then walked into the shop where I found Brian, one of Bill’s trusted people working on 0141.  Brian had spent many hours on 0141, as he was not only a good mechanic but also a very competent fabricator.  We all got to work and over the next couple of day’s things slowly came together. As Bill fired up 0141 it immediately went to a strong idle.  As the engine warmed, Bill revved the engine slightly and man-o-man did this thing have a roar.  Bill looked at me and we both had this smile from ear to ear. Bill then took 0141 for a test drive around the business park where Bill’s shop is located and after a couple of loops, he came back to the shop where there was another hour spent adjusting the rear suspension.  Bill explained, “This is the only Porsche which has adjustable trailing arms which allows for a few degrees of adjustment.”  This adjustment is made without removing the trailing arm from the torsion bar.  It was then my turn to take 0141 out for a drive.  To make this happen the key is turned to “ON,” you pull all three dash switches, (fuel pumps & two ignition switches) and then I hit the starter button. 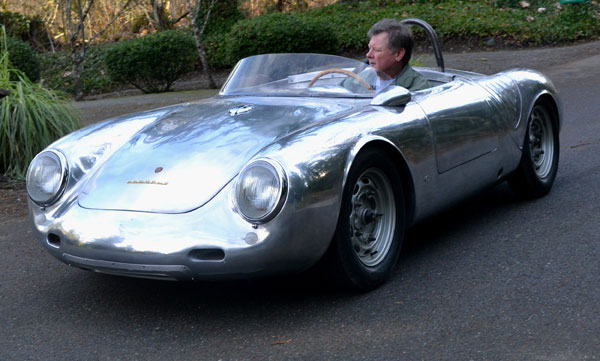 That’s the best description I can give.  First drive impression is “this is not my 356!”  Very stiff suspension, acceleration is most dramatic which I was not ready for from a small block Porsche.  Just incredible!

One thing I should mention here is that I was operating with something of a time line.  You see I had made a commitment to show 0141 at the Oktoberfest celebration at Carrera Motors in Bend, OR. which was now only three days away.  This is a great event and is the high point each year for me as far as the car scene goes.  Tom Anderson owns four dealerships of German cars, including the Porsche dealership.  But he also has a private club for the “Ultimate Car Guy,” called Club Carrera.  All these facilities are within one city block and are open late into the evening with some great food and refreshments.  When I made the commitment to show 0141 a few months earlier both Bill and I thought we would have no problem having the car complete long before this date, but then things don’t always work out as planed.

It was late afternoon on the second day and things finally came together.  We got 0141 loaded into the box truck, bolting her to the floor.  In the past, I have done some “Stupid Steve’s” when towing and this process is a very easy way to damage a vehicle.  However, 0141 was not going to move an inch even if this truck was laid on its’ side.

Bill and I said our goodbyes and I hit the road just as the sun was disappearing behind the Tetons.  There is a 10,000’ pass just as you leave Jackson and I decided to take this route, as it would cut substantial time off my trip.  I drove well into the night and was about 3 AM when I stopped at a rest stop in Montana about 20 miles east of Butte.  I checked on 0141, pulling up the door on the box truck only to find she hadn’t moved an inch.  In the dim light from the overhead lamps she seemed to show a smile from this very distinctive face and for some reason I felt so at peace, even though it was now freezing, and I was now sleeping in a cab of a truck with no heat and no sleeping bag.  “Stupid Steve”.

The next morning came very quickly as I really did not sleep much.  I hit the road early driving straight through to Issaquah, WA. arriving in the late afternoon.  But there was no time to rest as I had to get 0141 transferred into my car trailer for the drive to Bend the next morning and return the rental truck all within the next two hours.  Not sure how but all was accomplished and was able to get at least 7 hours of sleep before I headed out to Bend, OR.

On this leg of the trip I at least would have some company once I arrived in Bend.  My wife and son were flying into Sun River, where we all would stay during the Oktoberfest celebration at Carrera Motors.  I rolled into Bend after a 10-hour drive and was met by an old friend who joined us for a cocktail at the lodge before a long and deserved 10-hour sleep.

The next morning was spent getting 0141 cleaned up and set up as a display in the Club Carrera facility.  I must tell you the people here are great hosts, Tom Anderson, Chris Greenwood, and Rick Johnson of Carrera Motors took care of all my needs, and we ended up having a great time that evening sampling all the good food and wines all the while talking with some incredible car people. You can literally walk from one dealership to another viewing many incredible new cars then for your last stop you can find your desert in Club Carrera with many examples of vintage autos, and not just Porsches.  Tom Anderson’s Emory Special was also on display, very nice.  We spent the next few days taking in the beauty of the surrounding area of Bend before heading home. 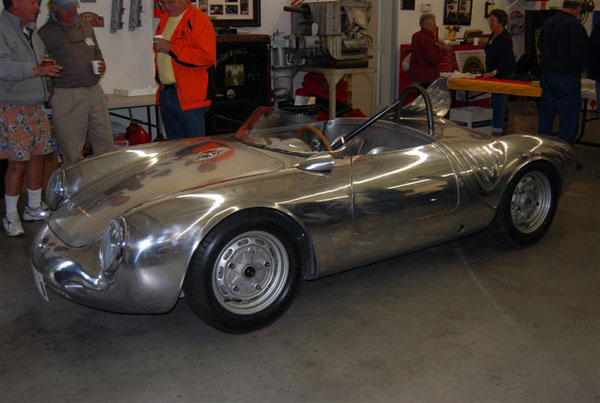 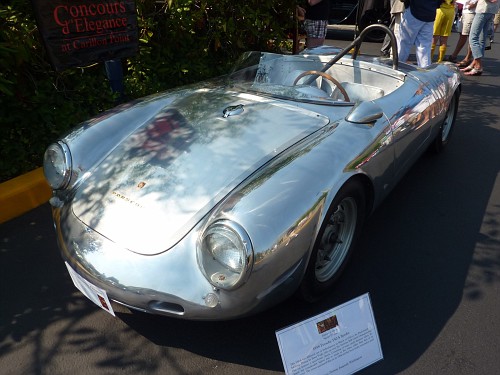 Today 550A-0141 has found its’ place in the garage among other cars from the same time period and similar power plants, but you must know it is the star.  It was in the first article on this process I talked about how destitute 0141 was and wondered if she would ever “roar” again as she did when she was first driven as a hill climb car by the Piech family of Austria.  Well, it has been a long journey, one that I will always covet.  But 26 years later oil is running through the lines like the blood through one’s veins and I know all the sacrifices were worth it. 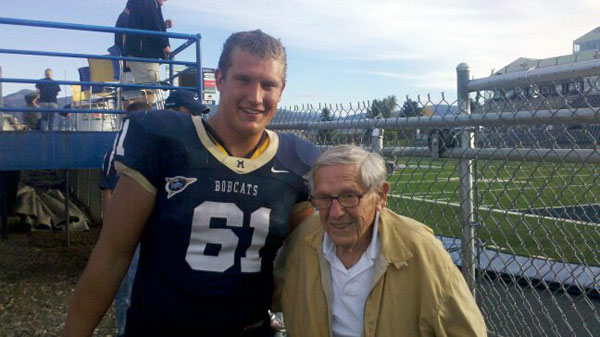 Many of you have asked about Dad, well he is still with us.  In fact, here he is in a recent picture with one of his many grandsons, taken just a month ago during the most recent football season.  This grandson is Alex Terrien who just happens to be the center for Montana State.  Alex and his team just won their division this year, so I guess you are looking at a couple of winners.

All the Best and only the Best!